Today, is the last Thursday in February
—this month honors/celebrates/remembers Black History.
My sketch highlights Kamala Harris, the first woman,
the first African American/South Asian woman
to become the Vice President of the United States of America—
Perhaps, this is a first of many more to come where all women will make
History/ HERstory. 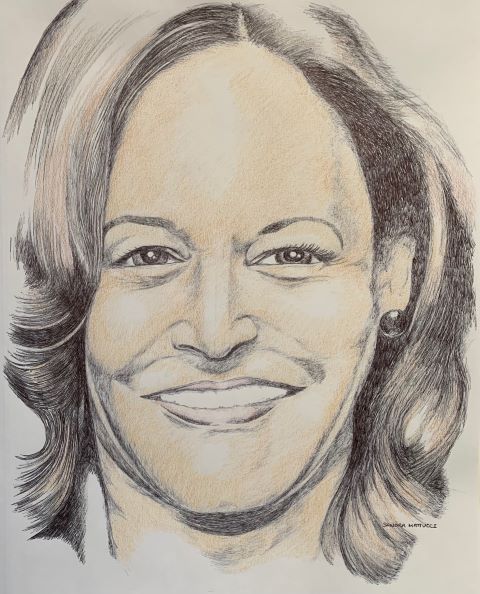 The binding of her being
a soft shade of brown.

From the dust of the earth,
she was fashioned.

Her DNA is linked to the soil’s foundations.

Her pages ‘inside’ were ignited like stars
—their flames lit words burned into
the core of her Divine being.

She stepped held in love, surrounded
by ‘bearers’ of light leading her down
paths that no entrance could deny her
access.

She is a Beacon for young girls,
older women, men with daughters who embrace the companioning
of the other gender understanding
its unique gifts.

The first woman to hold a position
of Vice President in the United States of America.

Imagine if ALL systems opened
their eyes and realized how much
MORE life giving,
how much more fuller they would unfold
to their highest good…
if all were given the opportunity to
become what they are called to be—
Each of us…
the chosen persons of God.

United we Stand.
United we live out the Story…

“Behold all things are made NEW.”

It is taking place right before
our eyes.

History being made…HERstory
being told.